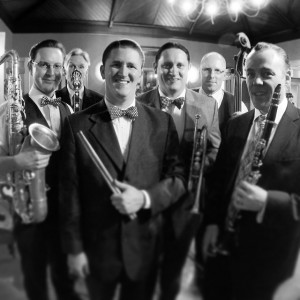 The Hot Jazz Alliance is truly an all-star band. Made up of leading lights from the world-wide traditional jazz network, they also boast a deep rapport and high level of musical consistency born of their recent tours of America, Britain and Australia. Young American jazz stars Andy Schumm and Josh Duffee join Australians Michael McQuaid, Jason Downes, Leigh Barker and John Scurry in an unparalleled diplomatic jazz coup. What sets the band apart is their energy – performing the most authentic 1920s era music, but with a unique joy, freshness and vitality. The HJA present music inspired by Bix Beiderbecke, the New Orleans Rhythm Kings, Johnny Dodds, the Austin High Gang and Louis Armstrong’s Hot Seven, but what the audience experiences is far from a carefully handled museum piece. This is the real thing – dynamic hot jazz with all the vigour of youthful abandon.

We are excited to announce that the Hot Jazz Alliance’s album ‘Bandstand Diplomacy’ is now available for download and purchase!

Thanks everyone who supported us during our 2015 tour! We had a blast, and loved meeting and playing for you all. Here’s hoping we can get the band back together again soon.

Josh Duffee is one of the great drummers of the early jazz tradition and the world’s expert on the music of Jean Goldkette and Chauncey Morehouse. At just 34 years old, Josh Duffee is regarded as one of the best 1920s style percussionists in the world today. He has performed at numerous jazz festivals and concerts all around the world, including Australia in 2001, 2003 and 2011, and England in 2008 and 2010. He is also the Artistic Director for the annual ‘Bix Lives’ Jazz festival in Davenport, Iowa. Josh has been fortunate to have shared the stage with musicians such as Randy Sandke, Tom Pletcher, John Allred, Bill Allred, Vince Giordano, Andy Stein, Dan Levinson, Jon-Erik Kellso, and, has performed or toured with ‘The New Wolverine Jazz Orchestra’ from Sydney, and ‘Spats Langham and His Rhythm Boys’ from the UK.

Andy Schumm‘s fate as a 20s style musician was sealed one night after hearing Bix Beiderbecke’s transcendent recording of “At the Jazz Band Ball” on an authentic Victor horn machine. At a mere 30 years old, Andy’s young age belies a deep understanding of the full scope of jazz history. Andy is at the forefront of the traditional jazz revival in Chicago and the American mid-west as the musical director of lauded hot jazz group ‘The Fat Babies’ which currently holds several residencies at Chicago’s premier venues. While he is heavily influenced by Bix, Andy draws inspiration from a variety of musicians including Red Nichols, Jelly Roll Morton, King Oliver, Jabbo Smith and Tommy Dorsey (especially in his covert recordings as a trumpeter!). As if that weren’t enough, he is a truly fine stride pianist as well.

Michael McQuaid plays jazz and swing from the 1920s and 30s with remarkable energy and originality. He is a true multi-instrumentalist, regularly performing on clarinet, saxophones, cornet and even occasionally piano. Now just 33 years old, he has been performing professionally since the age of 15. He was mentored by Australia’s finest traditional jazz musicians, including Ade Monsbourgh, the great Tom Baker and Paul Furniss. ‘Michael McQuaid’s Late Hour Boys’, a band showcasing the music of Aussie jazz pioneer Ade Monsbourgh, toured Europe in 2010, appearing at the acclaimed Jazz Ascona festival in Switzerland, Whitley Bay International Jazz Festival in the UK, and the Riverboat Jazz Festival in Silkeborg, Denmark. Additionally, he was an invited guest at the UK’s prestigious Whitley Bay International Jazz Party in 2012, leading an all-star band.

Jason Downes is one of the true ‘young veterans’ of the Australian Jazz circuit, and has been a mainstay or a guest in most the finest Hot Jazz groups in Australia since he was a teenager. Trained at the prestigious Melbourne Conservatorium of Music, Jason has also lived and toured extensively throughout Europe and the UK with ‘Alan Beechey’s Bright Stars of Jazz’ and the late Max Collie’s ‘Rhythm Aces’. He is also a seminal organising figure on the Melbourne Jazz scene, initiating many important events and tours. Jason’s fluent and natural clarinet and saxophone playing is always a rock-solid part of any ensemble, bringing warmth, humour and ease to every music project he participates in. Jason features mainly on Clarinet and Alto Saxophone with the Hot Jazz Alliance, and occasionally on tenor saxophone.

John Scurry is one of Australia’s finest and most experienced guitarists and banjoists. A versatile player who moves easily across the traditional and mainstream idioms, his career dates back to the mid 1960s when Australia’s famous Red Onion Jazz Band made several European tours. He has continued to perform continuously on the Australian scene over the decades, working with some of the best local musicians as well as visiting international artists such as Judy Carmichael, Dan Barrett and Jon-Erik Kelso. A versatile player he has amassed a strong legacy as a sideman on many recordings that date back to the 1960s and has several compositional credits to his name. A stalwart of the ‘Bob Barnard Jazz Parties’ over several years as guitarist, John is currently a member of vocalist Heather Stewart’s group, Mike McQuaid’s Late Hour Boys and co-manages ‘Virus’ a formidable collective of the cream of Melbourne’s hot jazz players in hip Fitzroy. Some say “ fantastic rhythm, creative soloing plus a wit and sense of humour that is second to none”….but not necessarily in that order.

Leigh Barker was born in Australia’s capital Canberra, and is widely considered one of Australia’s finest string bassists in any style of music. At 33 years old Leigh has already had a significant career as a freelance bassist, performing all around the world with Australian, American, European and Japanese musicians. Highlights include opening for the Branford Marsalis Quartet throughout their 2010 Australian tour, playing to 5000 swing dancers at the 2014 ‘Frankie Manning 100’ birthday celebration in New York, and touring the world with notorious Tasmanian pianist Tom Vincent. He leads his own award winning six piece group ‘The New Sheiks’ and is musical director of the innovative dance company the ‘Melbourne Rhythm Project’. He has recently added the brass bass to his repertoire, in particular to play hot 20s music with the Hot Jazz Alliance.

“Sorry” is how I felt for those members who were not able to get to the Club on Tuesday 11 April last. If you only had a minor complaint and didn’t bother to go, it serves you right for you missed one of the best night’s jazz in the recent history of the Club. The applause and standing ovation for the band was as spontaneous as anything I have heard and seen on a Club night for any group of musicians. On the back page of the newsletter we were promised that the night would be SPECIAL and it was! Hot Jazz Alliance included two fine musicians from USA. Andy Schumm was equally at home on cornet and piano. Josh (pronounced Jarsh) Duffee from Bix’s home town of Davenport, Iowa, was a fine drummer. These young men were joined by four musicians from Melbourne, Michael McQuaid and Jason Downes, both on reeds and at an age when they are at or near the peak of their powers. Michael is also one of the top trumpet players in Australia. Completing the line-up were John Scurry on banjo and guitar and Leigh Barker on bass. Individually and as a band they were excellent.

This group is a co-operative endeavour. For more information, interviews or booking enquiries, contact one of us: