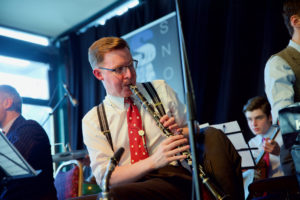 An Australian multi-instrumentalist resident in London, he performs on clarinet, saxophones and trumpet with incredible hot combination ‘The Vitality Five’, his own ‘Melodians’ and ‘Swing Stars’, and the recently formed ‘Michael McQuaid Saxophone Quartet’.

In 2004, he formed ‘Michael McQuaid’s Red Hot Rhythmakers’ to play vintage big band jazz. This band toured Europe in June/July 2008 to widespread acclaim, and has released two albums. They performed at Hamer Hall, one of Australia’s finest concert halls, in 2015 and 2017, along with special guests ‘Echoes of Harlem’, featuring many of Melbourne’s finest swing dancers.

Since relocating to London, Michael McQuaid has many new projects on the go – he may play music inspired by the past, but his focus is definitely on making music for the present – and the future.

‘Michael McQuaid should be a household name among traditional jazz fans. He’s one of the top reedmen of this generation, and a force behind many wonderful projects…’ (Joe Bebco, editor of the Syncopated Times, US)